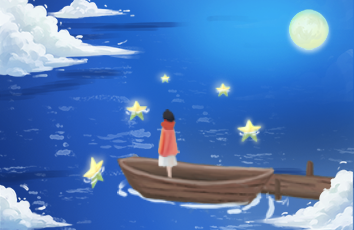 Two old gentlemen lived in a quiet street in Paris. They were friends and neighbors, and t
hey often went for a walk together in the streets when the weather was fine. Last Saturday they went for a walk at the side 【61】 the river. The sun shone, the weather was warm, there 【62】 a lot of flowers everywhere, and there were boats on 【63】 water.

Not long ago, I had my first on-line chat. I thought it would be【56】because. I have heard
so many people【57】it in that way. But it was, disappointingly, quite an unpleasant【58】.

On line I met a man【59】said he was a manager in a big company in Dalian. We【60】pleasantly first, then exchanged e-mail【61】in order to keep in touch in the future.【62】, he sent me【63】. When I opened it, I found, to my【64】, a detailed(详细的) self-introduction including age,【65】, weight, habits and future plans. It was an advertisement for a dating(约会) service! I was hurt【66】felt rather angry.

The relationship between one another should be mutual(互助的) politeness and【71】. Online we【72】see one another's physical form, but we are talking through our【73】. Such【74】as the one I met are not polite at all.

Since the Web belongs to everyone, every user has a duty to keep a friendly and polite atmosphere (氛围]). We need【75】honesty and respect on-line.

Historians tend to tell the same joke when they are describing history education in Americ
a. It's the one【56】the teacher standing in the schoolroom door【57】goodbye to students for the summer and calling【58】them, "By the way, we won World War H .

The problem with the joke, of course, is that it's【59】funny. The recent surveys on【60】illiteracy (无知) are beginning to numb(令人震惊) : nearly one third of American 17-year-olds cannot even【61】which countries the United States【62】against in that war. One third have no【63】when the Declaration of Independence was【64】. One third thought Columbus reached the New World after 1750. Two thirds cannot correctly【65】the Civil War between 1850 and 1900.【66】when they get the answers right, some are【67】guessing.

Unlike math or science, ignorance of history cannot be【68】connected to loss of international【69】But it does affect our future【70】a democratic nation and as individuals.

The【71】news is that there is growing agreement【72】what is wrong with the【73】of history and what needs to be【74】to fix it. The steps are tentative (尝试性的)【75】yet to be felt in most classrooms.